Why should we care about orangutans? 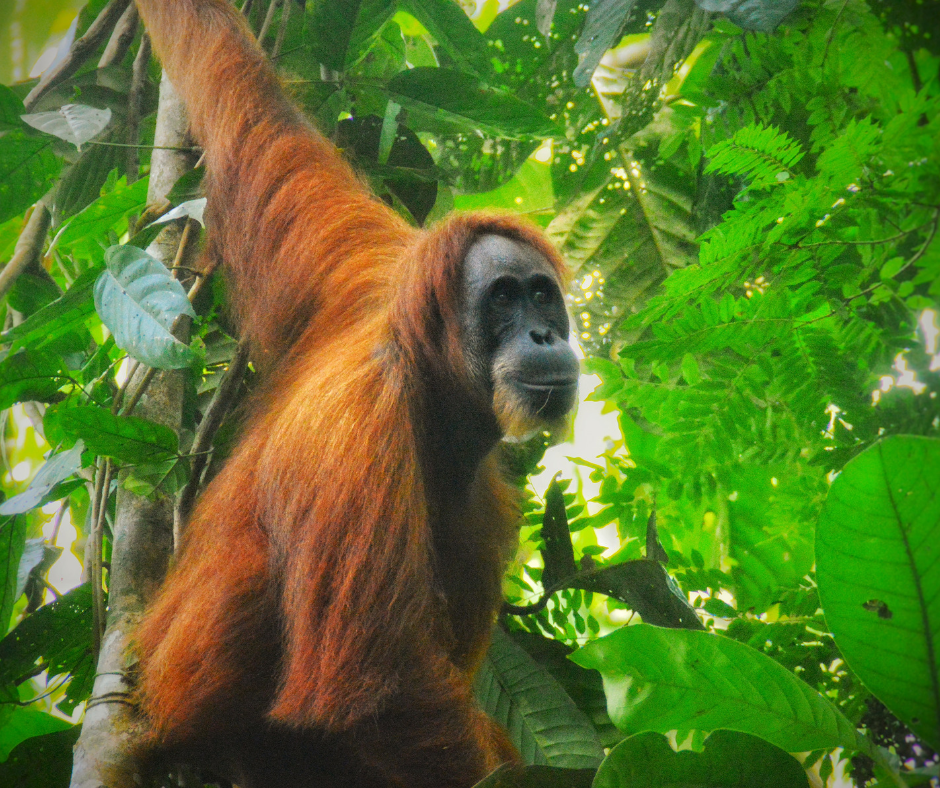 A Tale of Two Species

On the Island of Kalimantan, a Bornean Orangutan sits atop the last Pelawan Tree in a once vast forested section of rainforest with nowhere to go. Palm oil production, deforestation and habitat fragmentation is threatening the last remaining orangutan populations.  Deforestation also makes orangutans more vulnerable to the illegal pet trade and poaching. Due to these factors the total Bornean Orangutan population has been estimated to have dropped from 288,500 in 1973 to only approximately 104,700 today.

Halfway across the world, in Brazil, a jaguar sits at the top of a Kapok Tree awaiting a similar fate as the orangutan. Only 40% of the jaguar’s original range is left due to deforestation mainly for large scale ranching. Moreover, during the 1960s and 1970s at least 18,000 jaguars were killed every year for their pelt. Legislation has successfully reduced this but many ranchers still kill them illegally to protect their livestock. Both species and their respective ecosystems are threatened by the one thing that has the potential to save them; us.

Why Should We Care?

1. They Encourage the Establishment of Protected Areas

Since a male orangutan’s territory can be upwards of 39 Km² as they travel 1,000 meters per day foraging for food, they need large spaces to be successful. As a result, areas like the biologically rich 8,000 Km² Betung Kerihun National Park are established, benefiting every species that occupies this space.

Jaguars, like orangutans, have a wide distribution. Jaguars roam a 6 million Km² range from Mexico to Argentina, sections of which are termed Jaguar Conservation Units (JCUs). Because Jaguars are far and few, over multiple habitat types, they have the ability to support a wide range of species just by having these JCUs deemed protected.

2. They Shape Their Ecosystems

More importantly, both animals can be defined as keystone species. A keystone species is an animal who’s actions govern the well-being of a large majority of species in its given ecosystem.

Since the orangutan receives 60% of its diet from 150-90 different species of fruit trees, these animals as a result have very high seed dispersal rates. Orangutans help to shape their forests and provide habitat and food for other fruit eating species. Without them, the forest could not support the entire community,

Jaguars are a keystone species because they too shape their ecosystem as top or apex predators. Removing them from the food web would increase the amount of herbivores, like peccaries. Increases in peccaries would wreak havoc on the vegetation cover in the Amazon, threatening many plant species and the animals which rely on them to survive.

Additionally, these species can be used as a symbol and a tool for conservation, sparking a revolution. A flagship species does just that by becoming an advocate for their entire ecosystem. By being that charismatic, ambassador organism for a specific habitat they are able to generate funds and support that other equally important but less attractive species cannot. Orangutans and jaguars make great flagship species because they resonate with us as intelligent, familiar, and powerful animals. By being the face of a movement these species allow us to talk about the real roots of the problem.

The Root of The Problem: Illegal and Unsustainable Land Use

The need for conservation and preservation globally is continuing to rise as more countries are maximizing their output through unsustainable land practices.

Palm oil is a cheap and high yielding resource accounting for over 35% of all vegetable oil worldwide. In Indonesia, where 85% of all palm oil is produced, only 16.7% of the country’s producers have obtained sustainable certification. Through the process of creating mono-crop plantations, old growth forests are destroyed and peat fields burned. This not only reduces habitat but releases stored carbon into the atmosphere making this process extremely unsustainable. To make matters worse, some countries do not have strong laws regarding land protection and usage making it easy for anyone to claim land and start cultivating this crop.

A similar theme is occurring in Brazil where it’s section of the Amazon is losing an average of 7,770 Km² of rainforest yearly due to increased cattle ranches and large scale soy plantations. In addition to soy, Brazil and other South American countries like Colombia are at increased risk for palm oil cultivation as well.

This magnified, unsustainable land use creates fragmentation problems, dangerous for the orangutan and jaguar who need large areas to hunt, forage, and reproduce successfully. Unless our practices and norms are changed, many species and their ecosystems remain in a state of uncertainty.

What Can we do?

Unfortunately, the knowledge that these animals are ecologically significant, as well as the establishment of protected areas, is not enough to save these animals and their habitat. Still 80% of Bornean Orangutans are habituating outside of protected areas making them vulnerable to palm plantation development. Although the jaguar’s range is wide, fragmentation limits populations to certain areas. These areas become especially vulnerable as ranchers move in and start clearing land.

These are not the only species affected.  Agriculture and aquaculture threatens over 9,000 species worldwide. Of these 9,000+ species, the IUCN reports that 193 vulnerable, endangered, and critically endangered species worldwide are at risk due to the production of palm oil. This is a global crisis and has the ability to significantly reduce the amount of species that call this earth home.

To protect these ecosystems on the brink of collapse the rate of deforestation needs to be controlled through legislation, sustainable farming systems and research into alternative ingredients that do not endanger already vulnerable ecosystems and animals.

Palm oil is found in a wide range of products from soaps to margarine and is listed on food labels as anything from vegetable oil to glycerin. We need to take a step back and realize how our everyday actions through consumer demand can make an impact on conservation. Only then can we save these magnificent creatures.

For more information on how you can facilitate this change please visit, Orangutan Alliance.org or better still join our movement and create change through your choices.