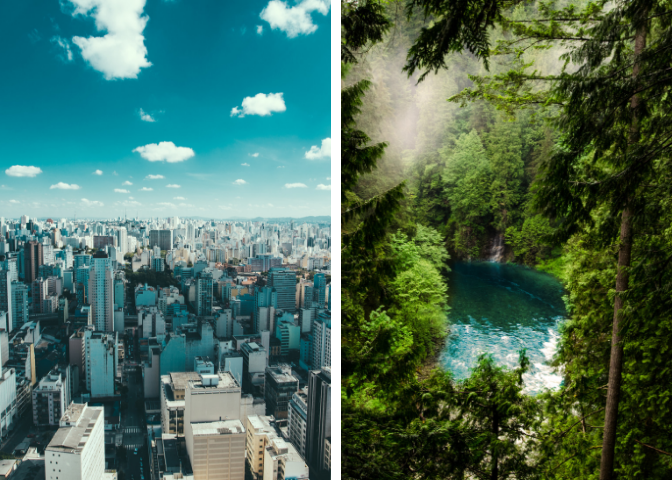 It is commonly accepted in today’s society that decisions made to protect the environment creates a strain on economic growth. This has led to a significant misunderstanding that a choice must be made between economic development and sustaining nature. We often speak as though they are competitors, and we claim one can prosper but not the other. This, however, is untrue as 100% of all economic activity relies entirely on the services and resources that nature provides. There is not a choice between economic development and sustaining nature when it is the earth’s natural resources and ecosystem services that drives economic change.

It seems that planners have become used to seeing nature as supplier of resources and dump for waste. The common links between the economy and the environment as described by the OECD Global Forum on Environment are as follows: the environment provides resources and services to the economy, while also acting as a sink for emissions and waste. Natural resources are essential inputs for production, while outputs of production leads to pollution and other pressures on the environment. As a consequence, poor environmental quality affects economic growth and wellbeing by lowering the quantity and quality of resources available. If current consumption trends continue, the global per capita use of natural resources will increase by 70% by 2050. It is inevitable that if current trends continue, we will reach the point where exploitation of the earth will in turn cause irreversible damage to global economies.

Nature provides our societies with more resources and ecosystem services than we may realise. Some are obvious, for example  clean and accessible water, air and land that is needed to grow crops, and fish which about 20% of the world’s population derives at least one-fifth of its animal protein intake from. Others are less obvious, such as the mangrove swamps and coral reefs that provide natural barriers against storms, or the diverse range of plants that provide pharmaceutical companies with resources used in medicine, the insects that provide essential pollination for growing around 70% of the world’s most productive crops, the services provided by animals, such as bees, doing the pollination work that underpins about one trillion dollars-worth of agricultural sales has been valued at $190 billion per year. Despite this, human induced climate change, deforestation, extinction and overexploitation of nature continues to rise, driven largely by economic growth and threatening the existence of these natural commodities. If we continue to exploit, damage and add pressure to the earth’s limited resources, it could lead to an absence of resources and services available to sustain the growing economy. This highlighting the counter-productivity of fuelling economies through the degradation of the natural environment.

Maintaining a healthy, prosperous environment is essential to maintaining a healthy economy. As we struggle to sustain nature, the long term economic repercussions are becoming more evident. When environmental degradation occurs, economic damage inevitably follows. This can be illustrated through the current climate crisis.  As we struggle to cut emissions from fossil fuels, our environment continues to degrade and impacts of climate change become increasingly evident. Scientists estimated that, if temperatures are to rise by just 2 C, global gross domestic product would fall 15%. If temperatures rose to 3 C, global GDP would fall 25%. If nothing is done to support the environment, temperatures will rise by 4 C by 2100. The industries most at risk are agriculture, fisheries, and forestry. One study claims that protecting and restoring forests would reduce 18% of emissions by 2030 and help to avoid further global temperature rise. While the current rate of deforestation is estimated to cost the world trillions of dollars every year. Subsequently, the damage will only get worse unless wide-ranging measures are taken to stop it. Regardless of this, there continues to be a significant disconnection between economy and nature, leading to exploitation and damage to the resources and services it provides. This counterproductive method has the potential to lead to irreversible damage to economic growth and the environment itself. Reversing these environmental trends is essential if the global economy, and the businesses that drive it, are to prosper.

As there is little or no price put on nature, is it common for it to be over-exploited. As long as nature and all it’s ecosystems services are belittled or entirely left out of the price of commodities produced from the environment, the earth will financially be worth more once it has been cut down, dug up, drained, polluted etc. One way to reverse negative environmental trends is through integrating the value of nature into our economies. A green economy – that is one that promotes both economic growth and environmental sustainability – is increasingly accepted as a key driver in tackling climate change, poverty, pollution, health and any number of critical goals to improve life for this planet and its people. It appears almost as if until there is sufficient incentive to conserve the natural environment and create green economies, large scale global environmental degradation will continue. Costa Rica has highlighted the significance of nature as a basis of their wealth and are acting to protect it through implementing green energy strategies, becoming carbon neutral, focussing on saving forests and oceans, and banning recreational hunting. Consequently, preserving nature is not entirely about protecting the environment, but also it is about keeping the economy strong.

The way humans are currently exploiting the earth’s natural systems in the pursuit of economic “growth” is significantly deconstructive for both nature and economies. The economy relies on the protection of nature as an essential prerequisite for sustaining successful long-term economic development. The longer we continue to disregard the roles played by natural systems the more substantial the damage on economies will be. To sustain the Earth’s natural resources is essential if the global economy, and the businesses that drive it, are to prosper into the future. The economy needs nature, they are not competitors but partners.