What more can you do after becoming palm oil free? 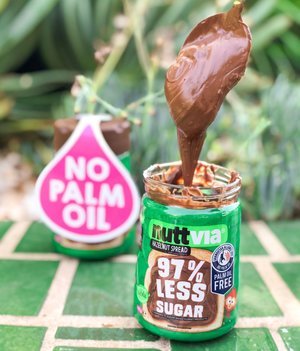 Nuttvia is a leading palm free hazelnut spread available at leading retailers. It contains 0 palm oil and has a 5-star health rating. We spoke to Kristy Wong from Nuttvia to discuss how they continue to spread good for the rainforests.

Brand creator Samual Tew has been working on changing people’s behaviour towards sugar since 2000. After successfully launching the natural sweetener Natvia he began to think about what else he could offer consumers as an alternative to sugar. After spotting the gap in the chocolate spread market Samuel Tew launched Nuttvia. “A defining moment for me was when my wife had gestational diabetes and asked me to do a supermarket trip for something sweet that was still natural. I came home defeated, unable to find anything sweet for her cravings,” Tew says.

Nuttvia is devoted to helping those that are less fortunate and contributing to the common good. Before Nuttvia was established, it has already been decided that any product made would be 100% palm oil free. “It made sense that we support orangutans and forest affected by the deforestation from palm oil plantations in Indonesia. It is a race against time in a battle against the forces of the influential palm oil leaders as the vast majority of land is converted to palm oil plantations. It’s crucial to us we help purchase and protect critical orangutan habitat” Wong says.

As a brand, Nuttvia wants to highlight the issues around non sustainable palm oil and the importance of protecting the rainforest for the animals, as well as being an example by making positive changes through giving back to the orangutans.

Since March 2019, Nuttvia has officially adopted six beautiful Orangutans: Carmen, Amelia, Jeffrey,Junior, Kobe, Hockey and Holland  through the OFI where they currently reside in Borneo, Indonesia. Nuttvia helps to care for the displaced and orphaned orangutans at the OFI Care Centre and Quarantine (OCCQ) facility, during their rehabilitation back to the wild. They contribute to providing the medical, dietary and emotional care for the orangutans to thrive. Additionally, they have donated to protect and help buy back rainforest land called The Orangutan Legacy Forest through the OFI. The OFI began purchasing land in Borneo with the intention of using it as a sanctuary for displaced Orangutans. Over 300 orangutans who have had their homes taken from them have taken refuge in the legacy forest. Nuttvia chose the OFI because they support the conservation, protection, and understanding of orangutans and their rainforest habitat in Borneo, while caring for and rehabilitating ex-captive orangutans for release back into the wild. “At Nuttvia we share their mission and vision of orangutan and forest conservation and we wanted to give back to an Australian orangutan group with a history of achievements that make a positive difference to the animals and environment.” Wong says.

Nuttvia is determined to #spreadgood well into the future by raising awareness about the work of various groups that protect the rainforest and orangutans. They will continue to give back with Nuttvia helping to fund for projects that care for orangutans. Find out more about their impact and projects via https://nuttvia.com/blog/.